In 1978, Don Meyer was a graduate student of Special Education at the University of Washington.  Energetic and kind, Don was a natural teacher to whom kids were immediately drawn.  At UW, Don was challenged by a professor to consider the impact of a disability on family members who were not typically found in clinic waiting rooms: first fathers, then, eventually, grandparents and siblings.

Don quickly learned there were considerable needs among these family members, but few supports to address them. 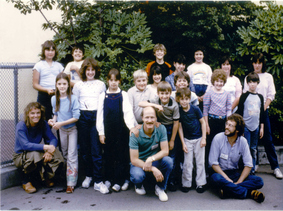 In 1981, Don became the Coordinator of the Supporting Extended Family Members (SEFAM) Project at the Experimental Education Unit at UW.  In researching sibling supports, he read about somber therapy groups for young brothers and sisters.  This support model did not speak to the 11-year-old in Don.  Children, after all, learn about and experience the world through play, and there was nothing fun about the sibling support models he studied.

Don had a different idea.  It centered around providing young siblings with information and support in a highly recreational setting. He called it a Sibshop, and launched the first one at UW in 1982.

In less than a decade, Sibshops flourished and grew not only in Seattle and Washington State, but across the U.S.  Increasingly, parents and service providers recognized the importance of supporting young brothers and sisters, and reached out to learn more about how to do so through Sibshops.

In 1990, Don created the Sibling Support Project, the first national program in the U.S. dedicated entirely to recognizing and promoting the important roles that siblings play in their families and communities, and to creating opportunities for brothers and sisters of all ages to receive the information and resources they need to support their families and themselves.

The Sibling Support Project began at Seattle Children’s Hospital, which to this day offers outstanding Sibshops throughout the year.